From the past to the present

The historical importance of Lisbon and its maritime vocation is attested through the most varied vestiges found throughout the estuarine area, dating back to the Paleolithic period; its strategic location led to the visit or settlement of pre-Roman peoples of the most diverse origins.

Phoenicia, a people essentially dedicated to maritime trade, took advantage of the geographical situation, climate, depths, and navigability of this estuary port, and established its colony Alis ubbo in Lisbon. Although there are traces of much earlier contacts, it was only in the 3rd century BC that it was occupied by the Romans, who called it Felicitas Julia, a name that derived for Olisipo. It has thus become a municipality like the models of Mediterranean urbanism, with commerce and industry, as shown by the significant archaeological legacy that has been found.

The Barbarian invasions of the Suevi and Visigoths, who called it Olisipona, were followed by the conquest of the city by the Moors, who called it Aschbouna. This people remained in Lisbon until the 12th century, valuing and enriching it.

In 1147, D. Afonso Henriques regained the city, aided by the Crusaders.

With the support of D. João I, the Lisbon bourgeoisie increased navigation methods in search of new peoples and new businesses, thus expanding the already known world frontier and turning the port of Lisbon into an important point for the whole world trade.

The development of navigation methods, such as vessels, attracted experts from other fields - geography, cartography, astronomy, seafaring -, who sought to respond to the new needs to reach new lands and other peoples for commercial and faith-expanding purposes; the ships were larger, better equipped and with greater capacity.

In Ribeira das Naus and in the many shipyards, mainly in Seixal and Barreiro, “carracas”, “urcas”, “naus”, “galés”, caravels and galleons were built. They anchored, at the time of the Discoveries, at the Restelo beach, and traded goods to and from all over the world, such as spices, cotton, soaps, pearls, rubies, teas ...

Little by little, the port of Lisbon was adapting to the economic, agricultural, and industrial needs; the recesses of river waters were being replaced by dry land, creating quays for unloading goods transported by barges and other typical vessels.

In the field of security and defense of the city, several fortifications were built on both banks in order to further help the castles of Lisbon and Almada.

In the 18th century, it is recognized the need to modernize the Port of Lisbon, thus appearing, in this century and in the following, general projects for the improvement of the Port of Lisbon, such as that of the Hungarian engineer Carlos Mardel, a project elaborated before the earthquake of 1755.

The contruction works of the 1st section

However, it is only in 1887 that the construction works of the 1st Section of the General Plan for the Improvement of the Port of Lisbon are awarded to the French contractor Pierre H. Hersent, after an international tender based on the project by Engineers João Joaquim de Matos and Adolpho Loureiro. The works were inaugurated by King D. Luís I on October 31, 1887, his birthday.

The works outlined the modern port of Lisbon providing it with piers, ramps, stone-paved slopes, shelter and ship repair docks, warehouses and other equipment, facilities that would be improved over the following years. 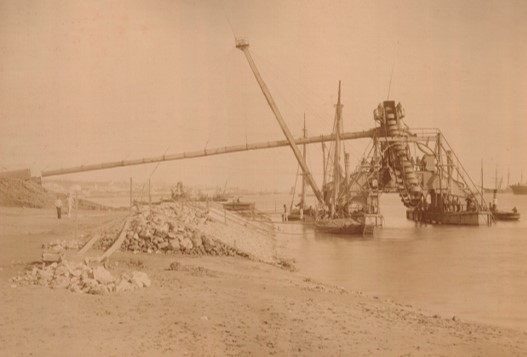 The port with a Board of Directors

The Law of March 11, 1907 authorizes the Government to explore the port on its own, in a jurisdiction area covering around 110 kilometers on the two banks of the Tagus and ten municipalities, in addition to the estuary, as established in article 2 of Decree-Law no. 36976, of July 20, 1948.

During this period, many improvements were made, such as new access roads, new railway lines and new warehouses, namely in Santa Apolónia and Santos, equipped with modern conditions like lightning and plumbing. 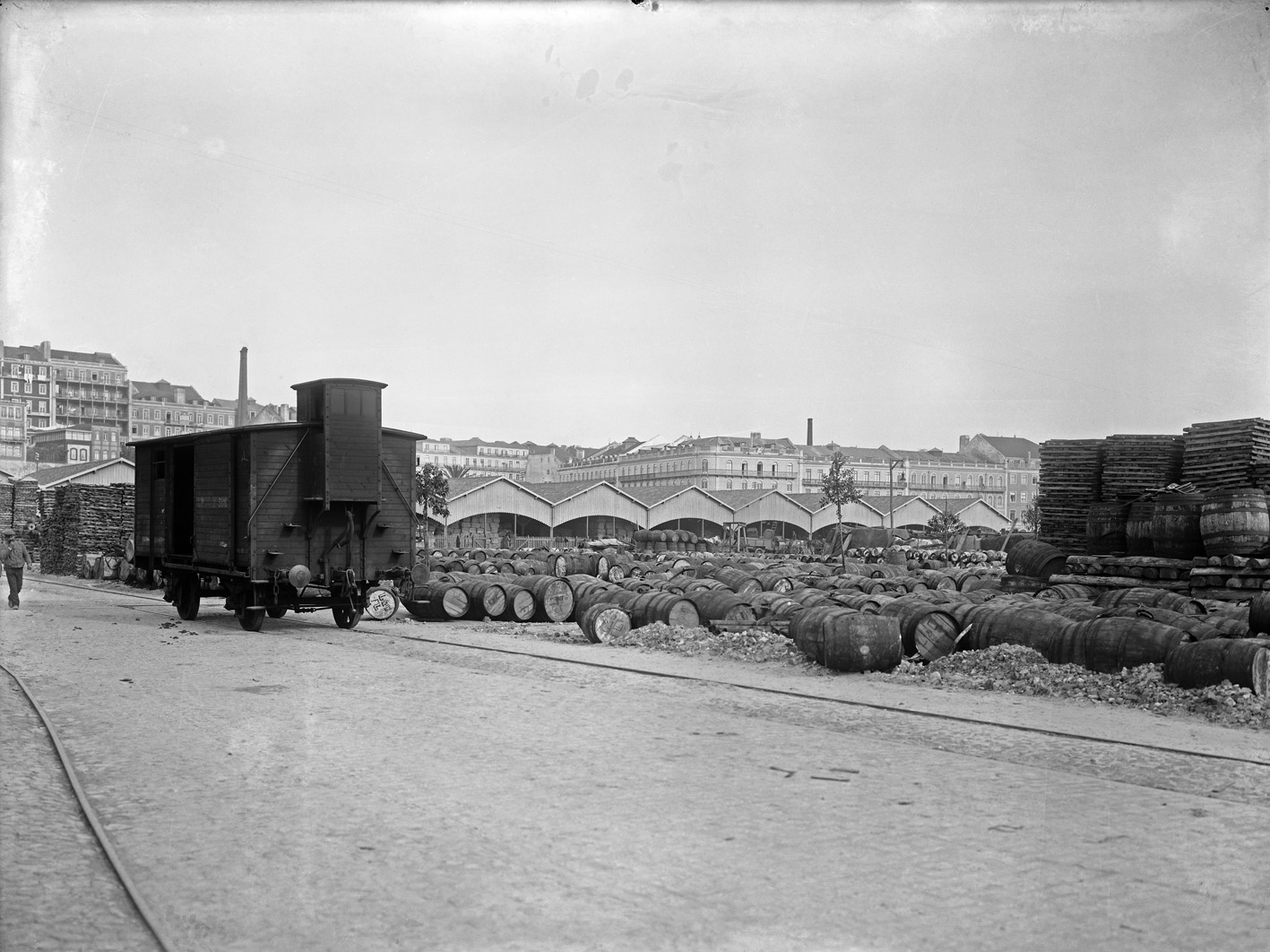 In addition, the increase in maritime passenger transport was also remarkable.

In 1908 construction began on the head and central offices of the port authority at Cais do Sodré, contributing to the refurbishment and embellishment of that area. 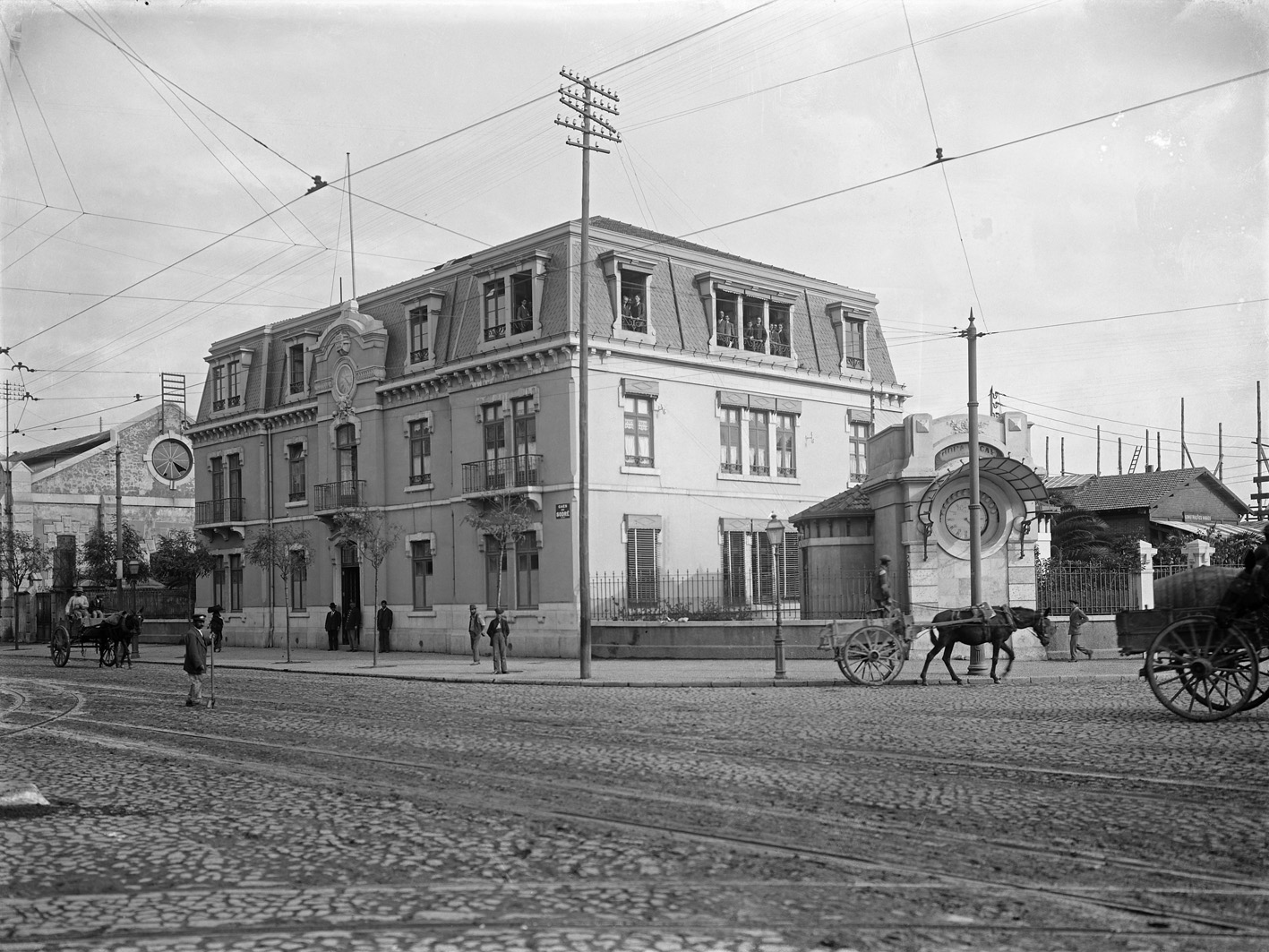 The Port of Lisbon suffers major changes during the following years: the improvement of the Alcântara Dock and its transformation into a tidal dock and the Santos Dock west quay construction (by the Spanish contractor José de Uribasterra); the replacement of the drawbridge in Alcântara Dock by the revolving bridge; the quay between Santa Apolónia and Xabregas and the Poço do Bispo dock construction; the margin regularization between Xabregas and Cabo Ruivo; the columns placement in Cais das Colunas. In 1933, two floating docks are installed in Ribeira, for passenger service and for the fish market. 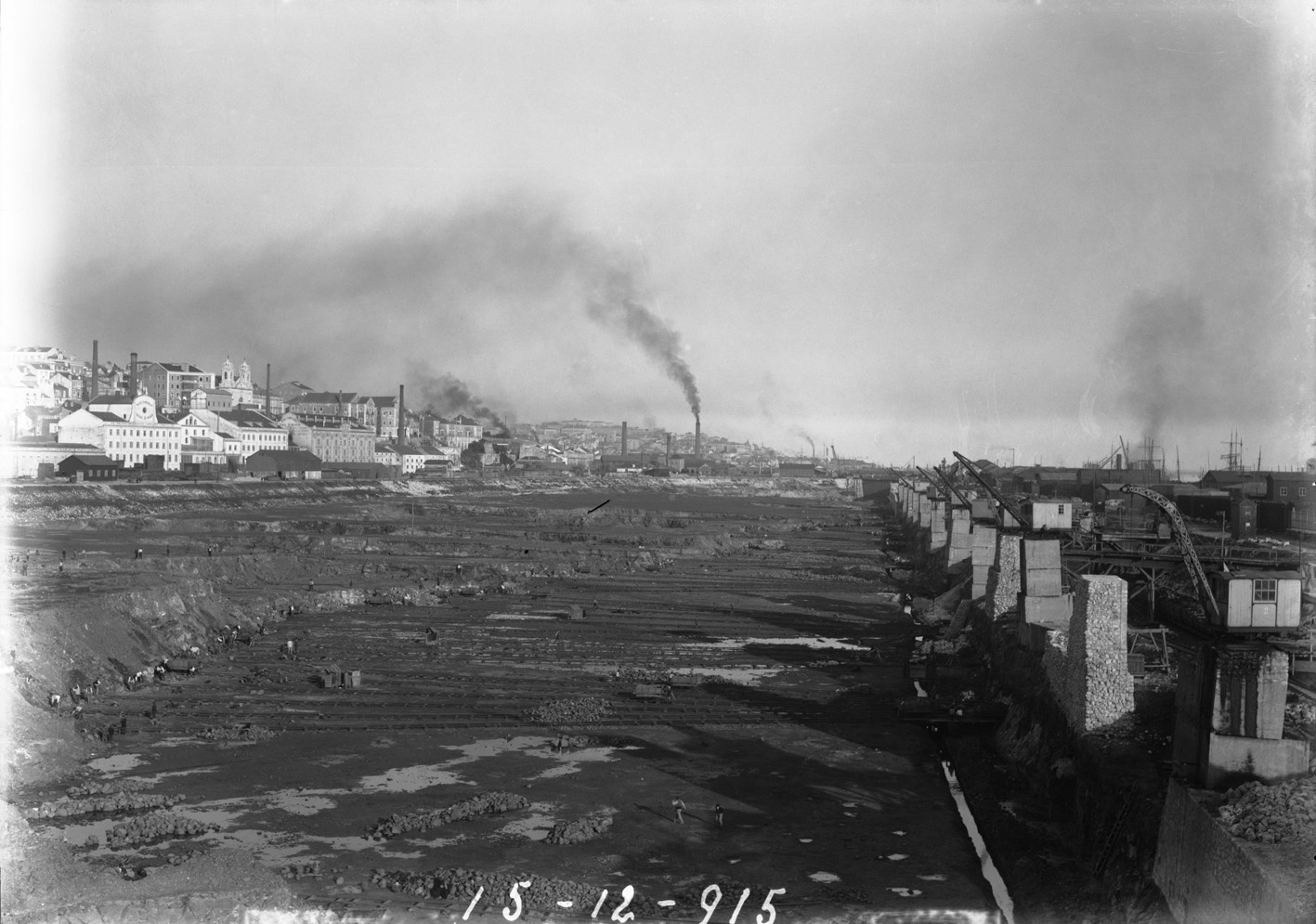 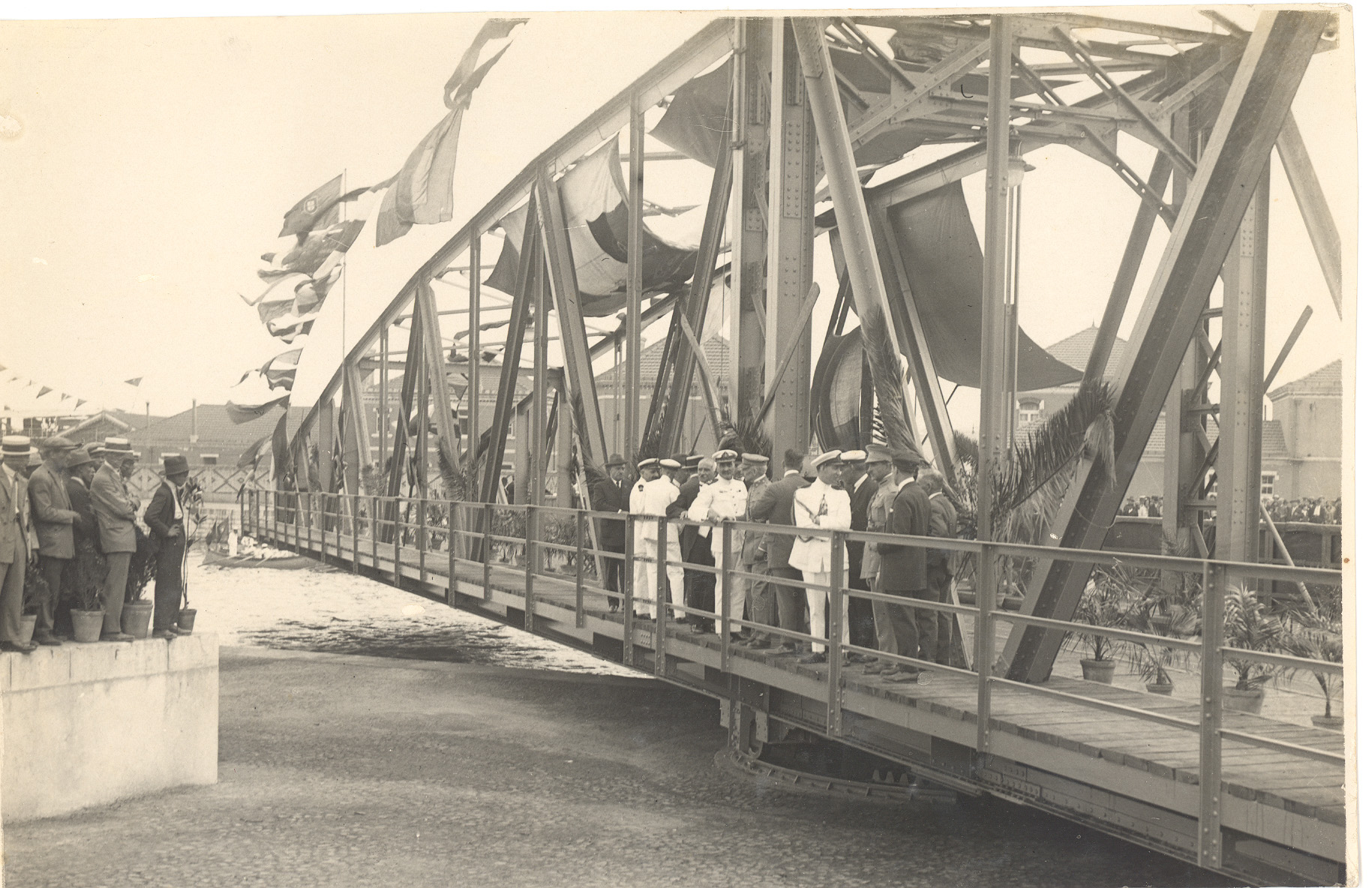 As for buildings, the highlight is the construction of a refrigerated warehouse for the storage and conservation of dried cod on the embankment of the Alcântara Dock.

The shipbuilding and repair facilities were expanded and properly equipped, and the dry docks of the Rocha shipyard were built. Later, in 1936, CUF - Companhia União Fabril became the concessionaire of this shipyard.

Between 1926 and 1930, various equipment was purchased, such as water boats, barges, a dredge, a pontoon, tugs, and crane equipment.

From 1946 onwards, the modernization of the port accelerates even more, with the publication of the “Improvement Plan for the Port of Lisbon (Decree-Law n.º 35716, of June 24, 1946), setting a “new milestone in the parth of progress that this port has been following since 1887”.

Among the improvements developed, some are noteworthy, namely the construction of the quay between Xabregas and Poço do Bispo and the completion of its dock, the margin regularization between Matinha and Cabo Ruivo and between Cabo Ruivo and Beirolas, the Olivais Dock, the fishing dock at Pedrouços.

Naturally, also noteworthy, are the maritime stations. In the 1940’s, the Maritime Stations of Alcântara and Rocha (on the Rocha quay) were built, both designed by Architect Pardal Monteiro, and both decorated with paintings by Almada Negreiros: the two triptychs in Rocha Maritime Station show aspects of the port life, and the 8 paintings in Alcântara Maritime Station illustrate the Portuguese maritime vocation. 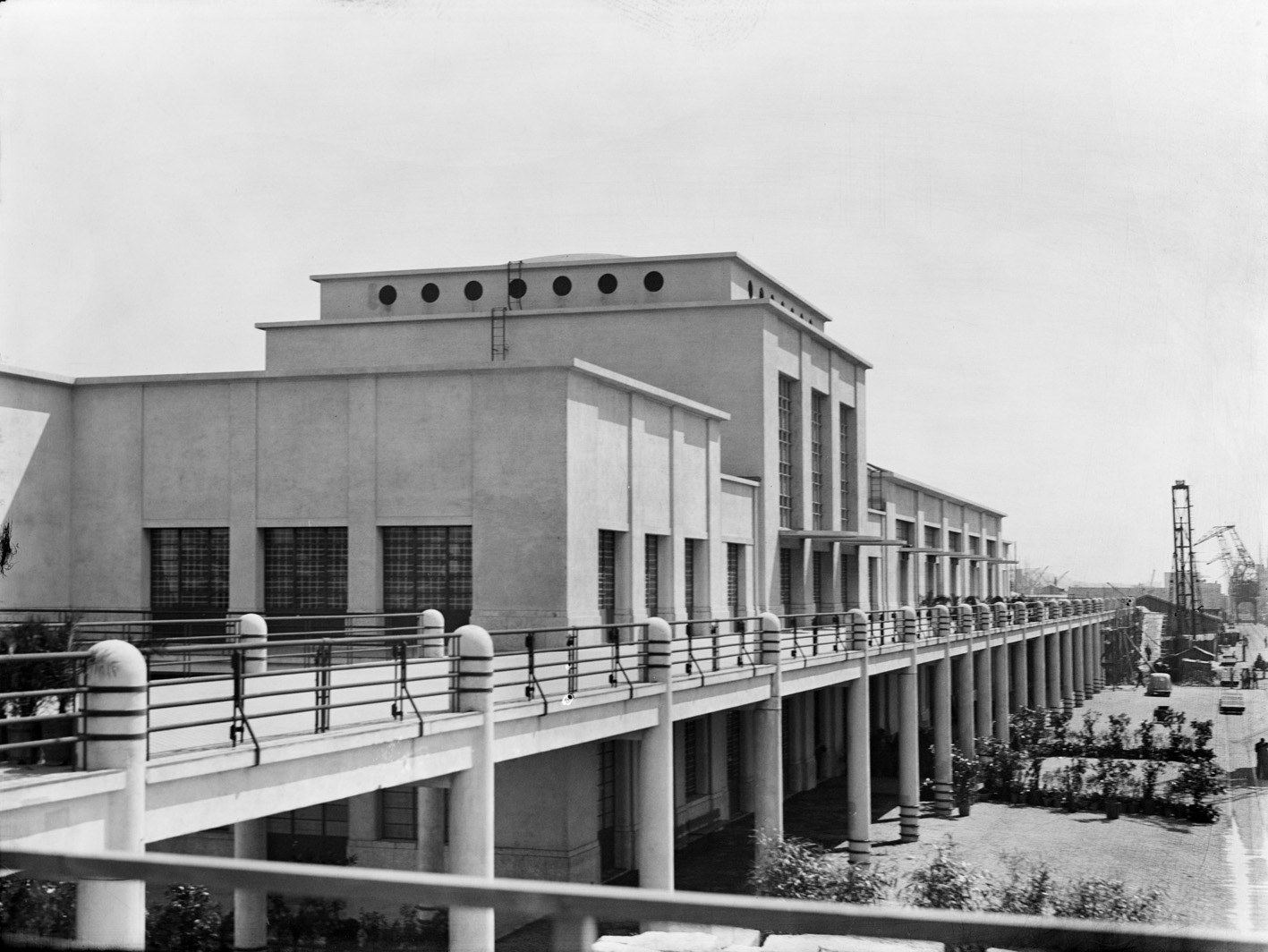 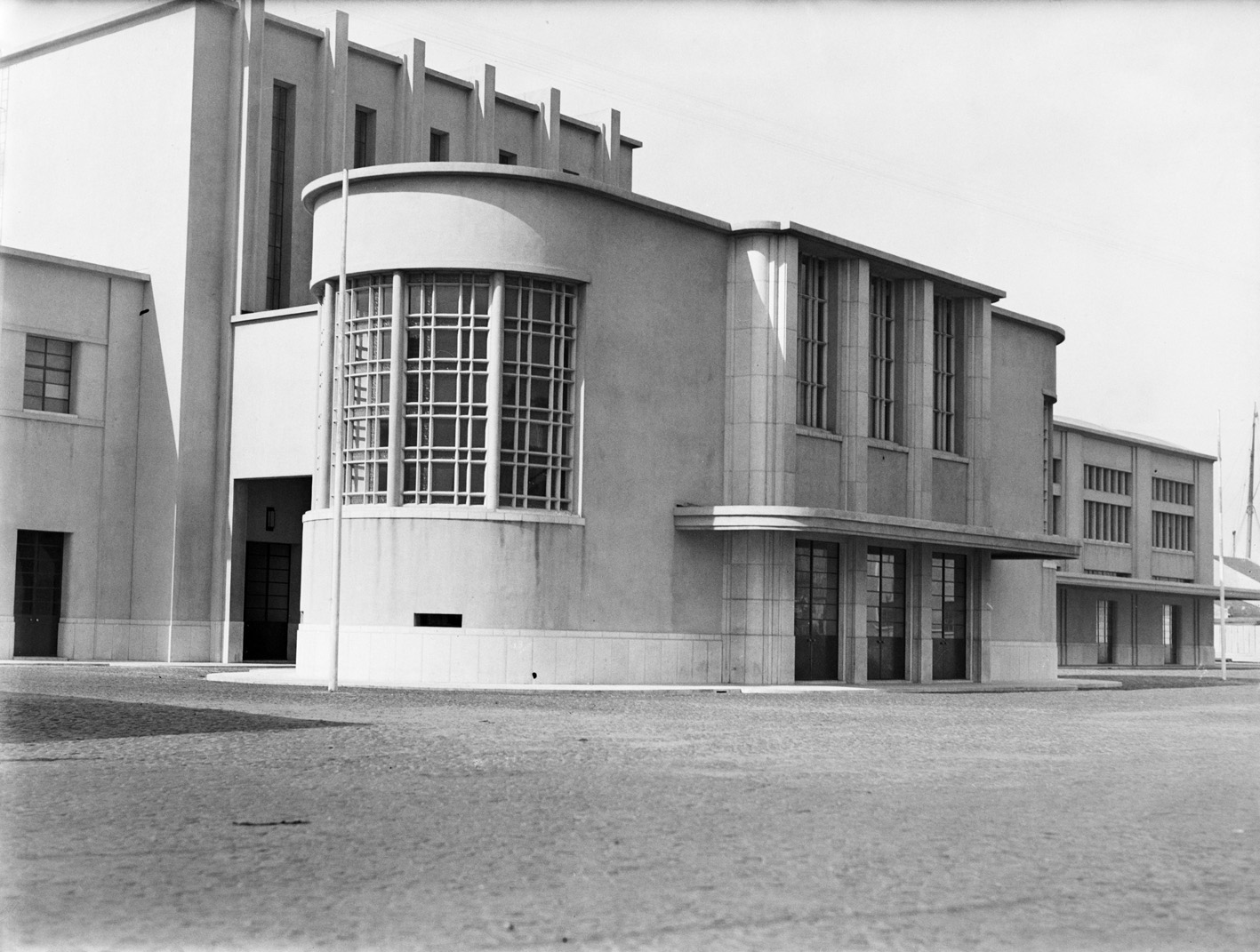 In 1970, the port of Lisbon kept pace with the development of other ports regarding containerization and even plays a pioneering role in the Iberian Peninsula, inaugurating the first container terminal with its own crane in Santa Apolónia. 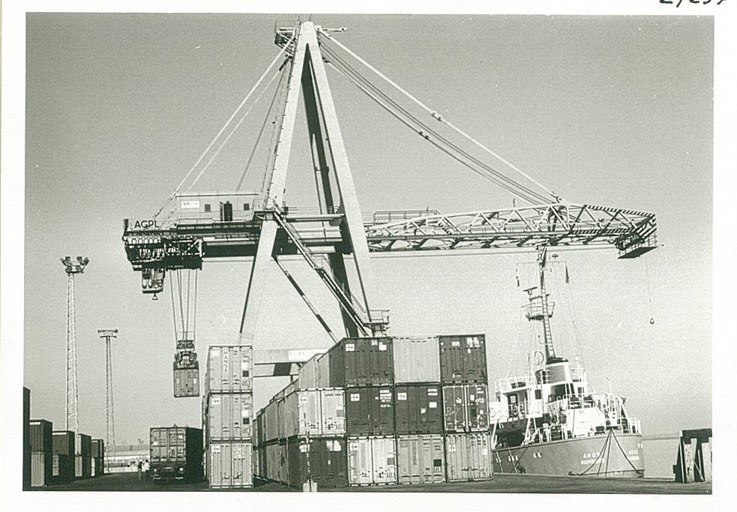 In 1989, the 1st Strategic Plan of the Port of Lisbon expressed the new objectives for the port of Lisbon; and Decree Law n.º 324/94, of December 30 approved the general bases for the public service concession of cargo handling in port areas.

The new millennium begins with the construction of the VTS Tower, designed by Architect Gonçalo Byrne. This building houses the Maritime Traffic Control Centre of the Port of Lisbon, which manages all navigation within the jurisdiction area of the port. 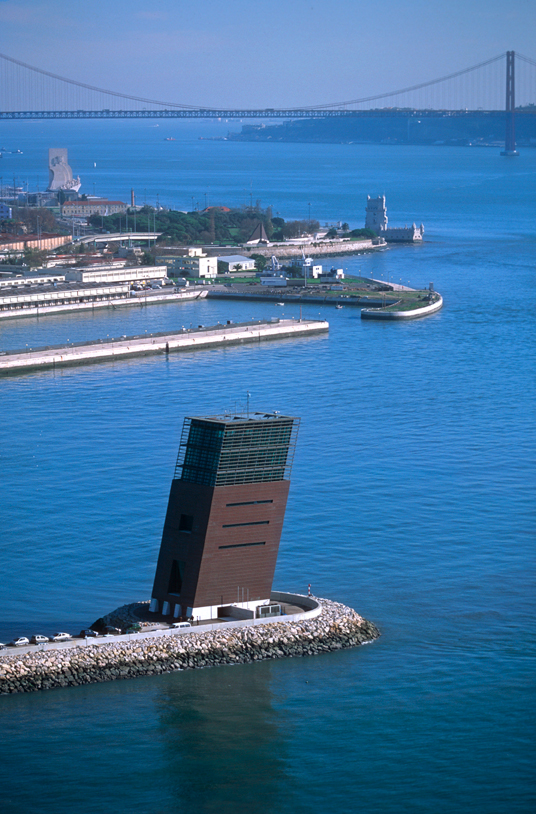 In 2008, the first electronic platform for the dispatch of ships and goods, called the Common Port Platform (PCom), came into operation at the Port of Lisbon and at the Port of Sines. This was the first version of the “Port Single Window”, developed in close articulation with the SDS system of the General-Directorate for Customs (DGAIEC).

Simultaneously and in the same year, the process of extending the JUP platform – Port Single Window - to include all national ports and other public and private entities began, paving the way for the effective standardization, harmonization and simplification of procedures, a fundamental instrument for the collective efficiency of the port and its community.

The Port Single Window has its evolutionary continuity in the Logistics Single Window, under implementation, for a better articulation between all the players in the logistics chain, in which maritime transport is only one of the links. 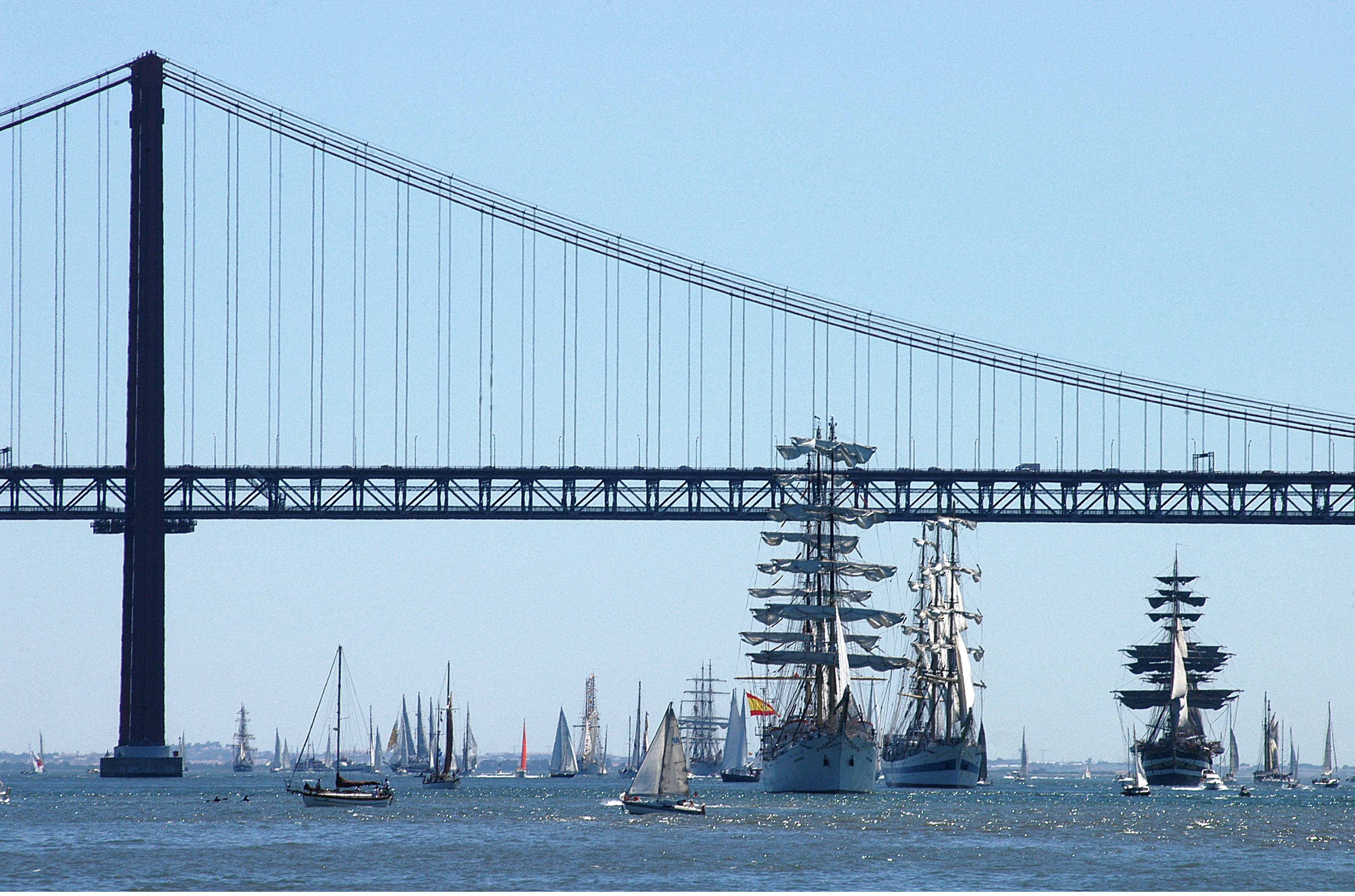 Sporting events improve the cities’ relationship with the port; our connection to the sea is visible in events held by the Port Authority, such as the Tall Ships Race and the Volvo Ocean Race, which make the port of Lisbon internationally recognized.

In the past, present and future cruise navigation has been and will always be a part of the port of Lisbon. Since 2017, the port of Lisbon has a new cruise terminal designed by the architect Carrilho da Graça, with more than 1100 meters of berth, a world-class gateway to the city that embraces its port. 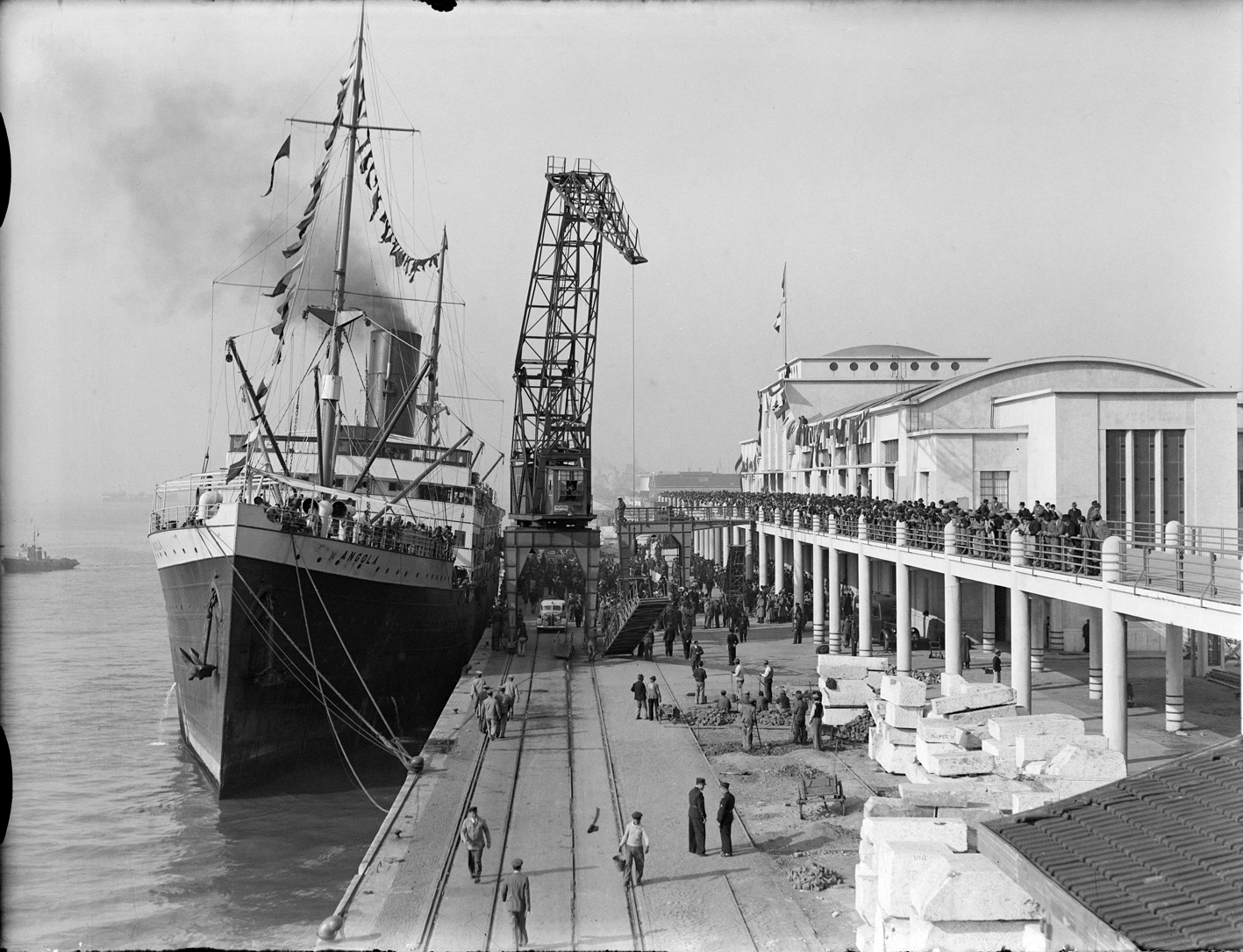 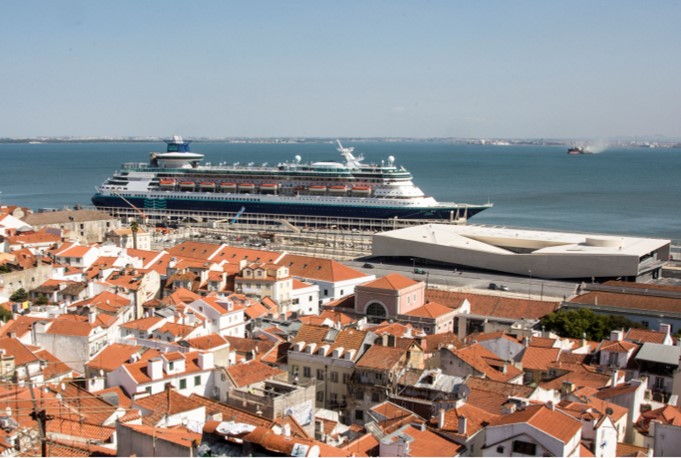