The navigation channels of the Tagus estuary are its main access and circulation routes. They establish the connection to the Atlantic front, allow maritime and river navigation within the port, as well as the river connection beyond the upstream limit of the port of Lisbon, in Vila Franca de Xira.

Navigation in the access bars and inside the port, defined between the alignment of the Bugio lighthouse, the S. Julião da Barra lighthouse (Entre Torres line) and this one with the spur of Cova do Vapor and the bridge over the river Tagus in Vila Franca de Xira, is subject to the rules established in the APL Port Authority Regulation.

The main access channel to the port, called the Barra Sul channel, is located at the mouth of the estuary, is 2.7 miles long and has a depth of -16.5 m ZH.

The main navigation channel on the Tagus is defined by the pillars of the 25 de Abril Bridge (Zv = 080º), until crossing the Zv = 000º to the Torre de Belém, through the channel defined by the 275º from these crossing points to the South and North limits from the Barra Sul channel and within those same limits between the Entre Torres line and the Zv = 000º to the Cross of the Madre de Deus Church.

The hydrographic cartography of the network of navigation channels in the port can be consulted at the Hydrographic Institute, in Nautical Charts of the Port of Lisbon.

Detailed information on the different channels, including geographic location and responsibilities for maintenance, monitoring and marking, can be found in Annex 18 of the APL Port Authority Regulation.

The Port of Lisbon is connected to the national rail network on both banks of the Tagus. The Northern Line (Lisbon-Porto) and the Southern and Southeastern Line (Barreiro-Faro) are its main rail accesses.

The Alcântara Container Terminal, through its own branch with connection to the Alcântara branch and the Campolide node, ensures the transit of containers to multimodal platforms, such as Bobadela, Leixões and Elvas, and to different destinations such as Guarda, Madrid, Tarragona, Valencia, Zaragoza, Barcelona and Bilbao.

In the eastern part of the port, from Santa Apolónia to Poço do Bispo, the container, multi-purpose and bulk food terminals have dedicated extensions with connection to the North line, which allows the connection to 2nd line logistics platforms and articulation with the hinterland Iberian port.

In Alhandra, the Iberol and Cimpor terminals are also equipped with dedicated branches that connect to the national north and south lines.

On the south bank, the Barreiro Solid Bulk Terminal is equipped with a double track on all quays, with the possibility of connecting to the national rail network South, through the private branch of the Tagus Bay.

In the Port of Lisbon the movement of goods is concentrated in the western (Alcântara) and Eastern (Santa Apolónia - Poço do Bispo) areas of Lisbon, in Alhandra, Almada and Barreiro. Only the eastern part of the port has a street with an internal port belt with access to the different terminals. In the remaining cases, port terminals are directly connected to national roadways.

Despite being inserted in an urban network in the municipality of Lisbon and in industrial / logistics areas in Alhandra, Barreiro and Almada, the port of Lisbon has connection to the main highways, such as the North-South Axis, CRIL, CREL, Second Circular, IP7, IC32, A1, A5, A8 and A2, which ensure the circulation of goods and connection to the port's hinterland.

Port of Lisbon within the European Transport Network

In this network, the Port of Lisbon is one of the “core ports“ of the Atlantic Corridor, which connects Portugal, Spain, France and Germany. Its integration includes the sea, river, rail, road, 1st line platforms (port terminals) and 2nd line logistical platforms (Poceirão).

In the maritime connection, the Port of Lisbon integrates the Motorway of the Sea of Western Europe, which connects Portugal and Spain to the North Sea and the Irish Sea, via the Atlantic Arc. 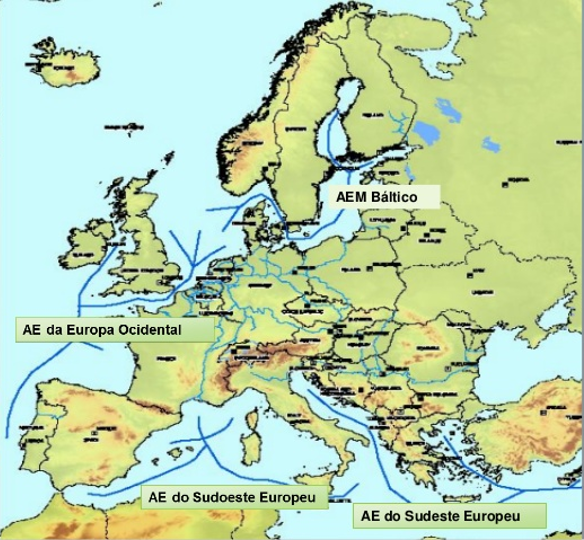